This distinctive chest with drawer, circa 1710–1715, leaves little doubt as to the identity of the original owner. Mary Burt, born in Springfield, Mass., was around 15 years old when she received this personalized present from her parents—a common practice in the 18th century. A gift to the DAR Museum from Mrs. Carlos E. Pitkin in 1947, the chest allowed Mary to store and secure under lock and key the textiles and other valuables that she would take to a new household when she married Preserved Marshall in 1716.

Mary’s parents chose expensive carved decorations to adorn the white oak chest’s front, which required the meticulous attention of a skilled craftsman. In order to highlight the carved stylized flowers, the decorative elements were originally painted red, black and white or possibly yellow.

Having her maiden name on the chest allowed Mary to retain her own identity even after marriage. This practice was a holdover from European patriarchal society in which men owned “real” property, such as land or homes, and women occasionally owned “moveable” property, like this chest. Often, though, laws strictly controlled and restricted the ownership of property by women. In light of these limits, it seems as though her parents were announcing to the world that this chest was Mary’s forever. 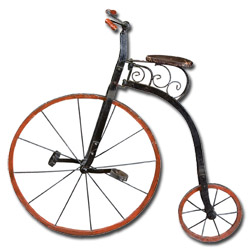 High-wheeled bicycles, also called penny-farthings, were a craze of the 1880s, when this child’s bicycle was manufactured. They were popular with all ages despite design flaws: They sent riders... END_OF_DOCUMENT_TOKEN_TO_BE_REPLACED