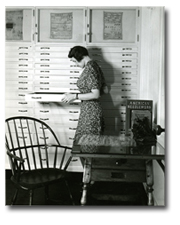 This 1943 photograph illustrates the DAR Museum's former
Textile Study Room where samplers could be stored and studied.

This presentation is based on the original DAR Museum exhibition, Telling Their Stories: Nineteenth- Century Samplers and Silk Embroideries, April 11- August 30, 2008. The exhibition celebrated the lives of girls and women by placing their needlework within the context of changing nineteenth-century American life.

Samplers existed long before the nineteenth century, of course, with scholars documenting their presence in ancient Egypt.  Through time and place this form of needlework evolved as an important part of a girl’s genteel education. By necessity every girl needed sewing skills, but in early America only the wealthy could afford schooling in the "ornamental arts."  After the Revolution and slowly through the nineteenth century educational opportunities improved. With an evolving emphasis on academic subjects for girls, needlework instruction was gradually phased out of the nineteenth-century school curriculum.

Although today often critiqued for technique and design, samplers and silk embroideries are perhaps even more important as historical documents. Through study, they may reveal the ideas, beliefs, and attitudes of their time; refer to historical events; serve as a genealogical reference; or even record lost settlements or architecture. And finally also, signed schoolgirl art may provide the only proof of a young girl’s existence.

Schoolgirl art is a contemporary term used to classify samplers, silk embroideries, paintings, and other ornamental art forms made under the instruction of a teacher at home or at school.  The DAR Museum collection includes more than 300 examples of schoolgirl art, mostly samplers and silk embroideries. The first samplers came to the museum in 1910. Since then, DAR members have donated about 75% of this collection. The accompanying family histories have greatly enriched the process of "telling their stories."

This exhibition is divided into seven segments with a short label explaining each. To view the needlework, click on the title.

This city view conveys the bustling activity of the New York City docks in a scene providing the first impression of America for newly arrived immigrants.

Originally belonging to Captain Christopher Marshall of Revolutionary War fame, this mahogany and white pine desk was made in Boston between 1765 and 1790. The desk was expensive not only because the... END_OF_DOCUMENT_TOKEN_TO_BE_REPLACED