The Founding of the DAR

Just as an understanding of our nation's past is essential to its future, so a prologue of the Daughters' past is necessary to understand the strength and determination that will ensure their continued success.

The Daughters of the American Revolution, among other organizations, grew out of the late-nineteenth-century fervor of the Colonial Revival. One event helped concentrate this passion for the past. On May 10, 1876, the world joined the nation in the opening of one of the grandest birthday parties ever thrown – the Centennial Exposition in Philadelphia. Some ten million people attended the nation’s first international exposition, and one exhibit in particular seemed to capture the longings of American hearts after so many battles on so many fronts: “ A reconstruction of a ‘colonial kitchen’ replete with spinning wheel and costumed presenters sparked an era of ‘Colonial Revival’ in American architecture and house furnishings,” as described in more than one reference.
In the first one hundred years after its fight for independence, America, more concerned with its future than its brief past, was absorbed alternately with forming and refining its own unique democracy, exploring and expanding the continent, fighting another war with England in 1812, and reuniting the nation after the bitter battles of the Civil War. At the end of that war, the country was free again to pursue what it considered its “Manifest Destiny” to occupy the continent from “sea to shining sea.” But following the Centennial Exposition, suddenly the art and architecture, personal possessions, and histories of the founding fathers and mothers became American treasures to be preserved.
Initially, the Daughters thought to join the Sons of the American Revolution, organized in 1889, in what seemed a common mission: to perpetuate the memory and spirit of the Revolutionary patriots. But at a meeting of the Sons in Louisville, Kentucky, on April 30, 1890, the Sons voted to exclude women, galvanizing a force as determined as that which fought for American Independence. As Letitia Green Stevenson would later write in her 1913 account of the Society’s founding: “It became apparent that if women were to accomplish any distinctive patriotic work, it must be within their own circle, and under their own leadership. The ardor and zeal of a few undaunted women never flagged, and their determination to organize a distinct woman’s society became a fixed purpose.”
The morning after the Son’s fateful vote, “American women throughout the country read the account in the newspapers and were stirred with indignation,” a sentiment documented for posterity in the first annual report to the Congress of the newly organized National Society Daughters of the American Revolution. One of those women, Mary Smith Lockwood, widow of a Union soldier, noted author and women’s rights advocate, channeled her reaction in a stirring letter to the Washington Post printed in July 13, 1890. In it, she recounted the thrilling story of the heroic Hannah Arnett, who courageously challenged a meeting of men hosted by her husband in their home, shaming them into supporting the cause of the revolution. Mary Lockwood ended her letter with these questions: “Were there no mothers of the Revolution? Where will the Sons and Daughters of the Revolution place Hannah Arnett?” Her questions would be answered swiftly by hundreds.

On October 11, 1890, Mary Smith Lockwood hosted the first organizational meeting of the new National Society Daughters of the American Revolution. Eighteen women attended, as well as four of the six Sons of the American Revolution who would serve as the advisory board to the NSDAR in its first few years of existence. By the end of the meeting, eleven members had paid their dues, and the DAR opened for business with $33 in the bank.

Founder Ellen Hardin Walworth would write in the February 1893 American Monthly Magazine, “it is not a social organization…, it is an order patriotic, historical, genealogical, and holds itself closely to these objects.” Created in a time when women “were also reaching for something beyond the household,” when “the idea of doing something unrelated to their families was an enormous breakthrough for many,” as described by Gail Collins in America’s Women, this new society of women would harness a desire for service that was the defining feature of their Progressive Era.

The first members of the DAR were quick to realize and recognize that “there is a woman to whom we owe more than to any other woman . . ..”  At the urging of Mary Desha, Mary Virginia Ellet Cabell (inset) (1839-1930) attended the first organizing meeting of the National Society on October 11, 1890, and it was she who led it.  Mary Cabell agreed that the new Society “should be presided over by a lady prominent in the United States,” so that same day, she and William O. McDowell paid a visit to Caroline Scott Harrison, following up on the letter sent by Mary Desha two months prior.  The First Lady accepted, but only upon the promise that Mrs. Cabell would perform the bulk of those responsibilities, including not only presiding at most meetings but also handling the daily details of the office, forging policy, solving problems, and ensuring the success of the new organization.  So she was appointed Vice President Presiding and later President Presiding, singular offices that only Mrs. Cabell ever held.
Her home became the headquarters of the Society for its first year.  Daughter of Charles Ellet, Jr., a prominent civil engineer who built the first suspension bridge in the United States, it was Mary Virginia Cabell who proposed “the building of a House Beautiful, . . . the finest building ever owned by women . . .” one that would serve “as an outward and visible sign of an inward and spiritual grace.” She would live to see not only the realization of her vision in Memorial Continental Hall, but also the Administration Building and Constitution Hall.  She died July 4, 1930, at the age of ninety-one, the same date in history marked by American independence as well as the passing of signers of the Declaration of Independence, John Adams and Thomas Jefferson.

These elegantly appointed rooms, the home of Mary Virginia Ellet Cabell and her husband, William D. Cabell, served as the first home of the NSDAR for more than a year during which the Society held several meetings a month to chart the course of the new organization. 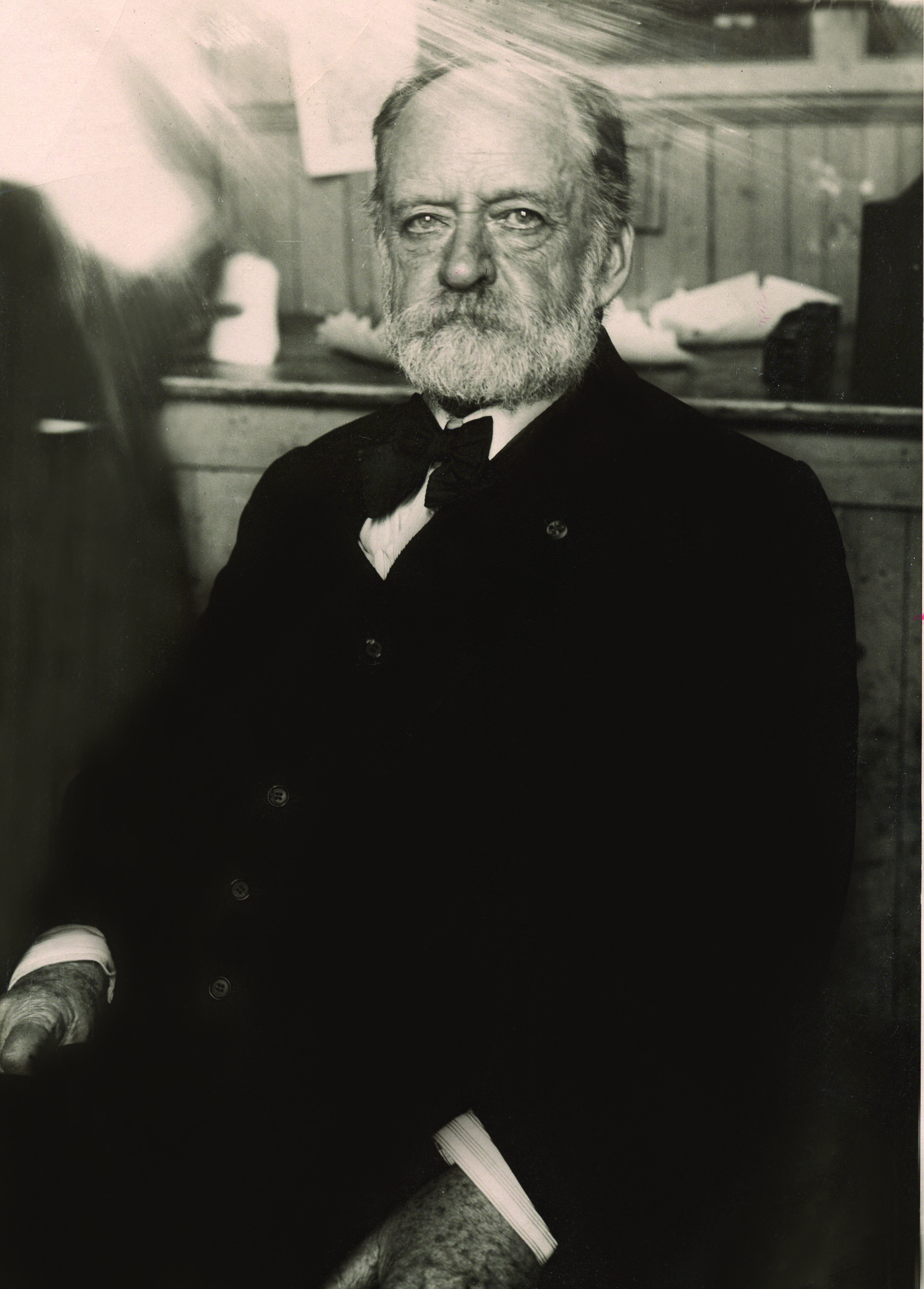 William O. McDowell, one of the founders of the Sons of the Revolution, reacted quickly and strongly when the Sons voted against allowing women to join the DAR, as did Mary Smith Lockwood, one of the four founders of the DAR.  Lockwood’s letter in the Washington Post on July 12, 1890, retold the story of Hannah Arnett, one of the first woman patriots of the Revolution. McDowell was the great-grandson of Hannah Arnett and, immediately after reading Lockwood’s letter in the Post, he penned his own response, published on July 21, 1890, stating, “ . . . in the hands of the women of America patriotic undertakings have never failed.  Why not, therefore, invite the formation of the National Society of the ‘Daughters of the American Revolution’ . . ..”  His letter concluded with the invitation to “every woman in America who has the blood of the heroes of the revolution in her veins” to send her name and address to him.  McDowell would attend the first organizational meeting and long serve as one of the advisors.  He was also one of the first to apply for membership in the Daughters of the Revolution.  They respectfully declined his application.

Decidedly non-traditional women were some of the first to join the new NSDAR.  Included in the approximately 850,000 application papers maintained by the DAR is that from women’s rights pioneer Susan B. Anthony (1820-1906). In a letter to the Kentucky DAR in 1897, she wrote:  “I hope . . . you will be exceedingly careful to distinguish those actions in which our revolutionary mothers took part.”  She became a member of the Irondequoit Chapter, Rochester, New York, in 1898.  Anthony was a descendant of Daniel Read, a private in the Continental army and a composer who later became only the second American composer to publish a collection of his own music.

The Daughters’ first Continental Congress was held February 22, 1892, in the Church of Our Father on 13th and L Streets, N.W., Washington, D.C.  Before they could adjourn, Mathew B. Brady, one of the most renowned photographers of his day, asked for “the privilege of making a photographic group of the Society, to be added to my historical collection of the most eminent people of the world.”   His image would capture not only the four founders but also the first President General, Caroline Scott Harrison (center), as well as the only member ever to hold the title of Vice President Presiding, Mary Virginia Ellet Cabell (to Mrs. Harrison’s right).  On Mrs. Harrison’s left are founders Eugenia Washington and Mary Desha.  Standing between Mrs. Harrison and Miss Washington are founders Ellen Hardin Walworth and Mary S. Lockwood.

These stories and more can be found in the DAR publication “American Treasure: The Enduring Spirit of the DAR” by Diana L. Bailey.