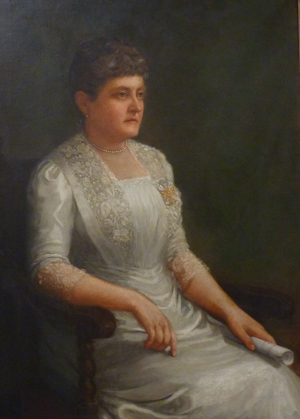 Eugenia Washington was born on June 24, 1840, near Charlestown in what is now West Virginia.  She was the daughter of William Temple Washington and Margaret Calhoun Fletcher, a great niece of Senator John C. Calhoun of South Carolina.  In 1859, when she was nineteen years old, her father moved the family to Falmouth, Virginia, just north of Fredericksburg.  Her mother died near this time and her father was disabled and relied on his daughter to care for him.

When the Battle of Fredericksburg was imminent in December 1862, Miss Washington wanted to escape with her father to a place of safety quickly, but was delayed one full day because a wounded federal officer was brought to her door and placed in her care while he waited for a surgeon.  The battle had begun by the time she was ready to flee and she and her father were caught on the battlefield.  She found shelter for both of them in a small trench left by a cannon.  They were forced to remain in that spot for a whole day and witnessed the entire battle from that position.  It is said that Miss Washington’s experiences that day inspired in her a will to assist women from both the North and the South in the worthy cause of preserving their shared heritage and that this was her purpose in helping to found the NSDAR.

At the close of the war, Miss Washington was offered a government position with the post office department, and so she and her father moved to Washington, DC.  Known fondly as “Miss Eugie,” she was considered quite attractive and always received a great deal of attention wherever she went.  Eugenia Washington died at her home in Washington on Thanksgiving Day, November 30, 1900.