The Daughters of the American Revolution was founded on October 11, 1890 by four determined women and a supporting cast of patriotic citizens. Decidedly not ladies of leisure, the four founders were anything but traditional. Learn more about the formative years of the organization and the brave women who lay the groundwork for the Society that is still going strong 125 years later.

Learn more about DAR's history through the DAR Presidents General

Mary Desha was born on March 8, 1850, in Lexington, Kentucky. She was well educated and for a short time studied at what is now the University of Kentucky. When her family was impoverished by the Civil War and the women were needed to provide an income, Miss Desha and her mother opened a private school in which they taught their friends’ children. Several years later, Miss Desha accepted a position with the Lexington public school system and remained there until she took a job as a clerk in Washington, DC, in December 1885.

After spending a few years in Washington, Miss Desha accepted a teaching position in Sitka, Alaska, in 1888. She found the living conditions endured by the Alaskan natives unacceptable and her written protest to the government in Washington resulted in a federal investigation. She returned to Lexington in 1889, but shortly thereafter accepted a post in Washington as a clerk in the pension office. She later worked as a copyist in the Office of Indian Affairs.

Miss Desha continued in the civil service until her death and also spent her own time after working hours acting as an Assistant Director of the DAR Hospital Corps during the Spanish-American War in 1898. Mary Desha died on January 29, 1911. Her fellow Daughters honored her memory with the first memorial service ever held in Memorial Continental Hall.

Mary Lockwood was born in Hanover, Chautauqua County, New York, on October 24, 1831.  She moved to Washington, DC, in about 1878.  Mrs. Lockwood’s residence was Washington’s elegant and imposing Strathmore Arms, and it was there on October 11, 1890, the formal organization of the NSDAR took place.

Mrs. Lockwood was the NSDAR’s first historian and the Society, inspired by Mrs. Lockwood’s commitment to historic preservation, resolved on October 18, 1890, to “provide a place for the collection of Historical relics which will accumulate…and for historical portraits, pictures, etc.  This may first be in rooms, and later in the erection of a fire-proof building.” She held many other national offices as well and served as editor of the DAR Magazine from 1894 to 1900.

Mrs. Lockwood was also a prolific author and wrote many noteworthy books.  Her last book, The Historic Homes of Washington, was dedicated to her older brother to whom she became close after her mother’s death when Mrs. Lockwood was only four years old.  She was an avid promoter of the work of women’s clubs and was both the founder of the famous Travel Club and for a time president of the Women’s Press Club.  She also held the position of Lady Manager at Large at the World’s Columbian Exposition in Chicago in 1893.

An acquaintance noted that “she is friendly to all progressive movements, especially so in the progress of women.”  Mary Lockwood died in Plymouth, Massachusetts, on November 9, 1922, and is buried in Rock Creek Cemetery in Washington, DC.  She was not only the last surviving Founder, but is also the only Founder buried in Washington.

Ellen Walworth was born on October 20, 1832, in Jacksonville, Illinois.  When she was about 12 years old her father, John Hardin, became a United States Congressman.  In 1846 Mr. Hardin entered the army to fight against Mexico and was killed while leading his regiment at the battle of Buena Vista.  The family continued to live in Jacksonville until 1851, when Mrs. Walworth’s mother married the Honorable Reuben Hyde Walworth and moved the family to Saratoga Springs, New York.

Mrs. Walworth earned her law degree at New York University and was entitled to practice before the Court of New York and the District of Columbia.  In 1852 she married Mansfield Tracy Walworth, her stepfather’s youngest son.  Mrs. Walworth opened her home as a boarding and day school after her husband’s death in 1873.  The school’s success required her eventually to remodel and enlarge the facilities.  Mrs. Walworth continued to live on the property year round until finally the cold New York winters affected her health and she began to make her home in Washington, DC, in winter.

One of Mrs. Walworth's earliest public efforts was her moving plea to the members of her local community to contribute to the fund to renovate George Washington’s home, Mount Vernon, in Alexandria, Virginia.  Mrs. Walworth wrote constantly on patriotic and historic subjects.  She was an authority on the battlefields of Saratoga and also published an account of the Burgoyne campaign.  She served as director-general of the Woman’s National War Relief Association of 1898.  Mrs. Walworth was the first editor of the official publication of the NSDAR, the American Monthly Magazine, serving from the spring of 1892 until July 1894.  Ellen Walworth died on June 23, 1915, and was laid to rest in the family lot at Green Ridge, near Saratoga, New York.

Eugenia Washington was born on June 24, 1840, near Charlestown in what is now West Virginia.  She was the daughter of William Temple Washington and Margaret Calhoun Fletcher, a great niece of Senator John C. Calhoun of South Carolina.  In 1859, when she was nineteen years old, her father moved the family to Falmouth, Virginia, just north of Fredericksburg.  Her mother died near this time, and her father was disabled and relied on his daughter to care for him.

When the Battle of Fredericksburg was imminent in December 1862, she wanted to escape with her father to a place of safety quickly, but was delayed one full day because a wounded federal officer was brought to her door and placed in her care while he waited for a surgeon.  The battle had begun by the time she was ready to flee, and she and her father were caught on the battlefield.  She found shelter for both of them in a small trench left by a cannon.  They were forced to remain in that spot for a whole day and witnessed the entire battle from that position.  It is said that Miss Washington’s experiences that day inspired in her a will to assist women from both the North and the South in the worthy cause of preserving their shared heritage and that this was her purpose in helping to found the NSDAR.

At the close of the war, Miss Washington was offered a government position with the post office department, and so she and her father moved to Washington, DC.  Known fondly as “Miss Eugie” she was considered quite attractive and always received a great deal of attention wherever she went.  Eugenia Washington died at her home in Washington on Thanksgiving Day, November 30, 1900.

A Brief History of the Founding of DAR

On October 11, 1890, eighteen women and four men met in Washington for the purpose of organizing the Daughters of the American Revolution.

The Sons of the American Revolution (SAR) had recently been founded in New York City on April 30, 1889. Some SAR societies permitted women and some did not. At the next year’s general meeting on April 30, 1890, the matter was put to a vote and the SAR decided to officially exclude women from its membership.

This event sparked controversy and discussion in the national press, and caught the attention of Mary Smith Lockwood. Incensed that the contributions of women to the American Revolution were not being recognized, Mrs. Lockwood wrote a fiery editorial that was published in the Washington Post on July 13, 1890. In it, she demonstrated convincingly that women had contributed much to the Revolutionary cause that had previously been overlooked and ignored. She asked, “Were there no mothers of the Revolution?”

William O. McDowell, Vice President General of SAR, disagreed with the vote and believed that women should form their own similar patriotic organization. He wrote his own letter to the Post, which was published on July 21, urging women to organize and offering his assistance. Six women soon replied, including Miss Mary Desha who wrote, “I am good for any amount of work.”

Eighteen women attended the first official organizing meeting held on October 11, 1890 at the Strathmore Arms boarding house at 810 12th Street, the home of Mrs. Lockwood. These include the four women traditionally considered to be the organization’s founders: Mrs. Lockwood, Miss Desha, Miss Eugenia Washington, and Mrs. Ellen Hardin Walworth. Four men also attended the meeting and formed the first Advisory Board to the NSDAR.

During the meeting, the first slate of national officers was elected, with the nation’s first lady, Mrs. Benjamin Harrison, as President General. The women adopted a tentative constitution, discussed the scheduling of annual meetings, and decided that October 11 would be the permanent anniversary of the society. Their first resolution pledged support toward completing the memorial monument to Mary Washington, mother of George Washington. And so the first meeting of the DAR was adjourned, having laid the groundwork for a long tradition of patriotic service to the nation.

Based on the account in A Century of Service: The Story of the DAR by Ann Arnold Hunter. NSDAR: Washington, D.C., 1991. 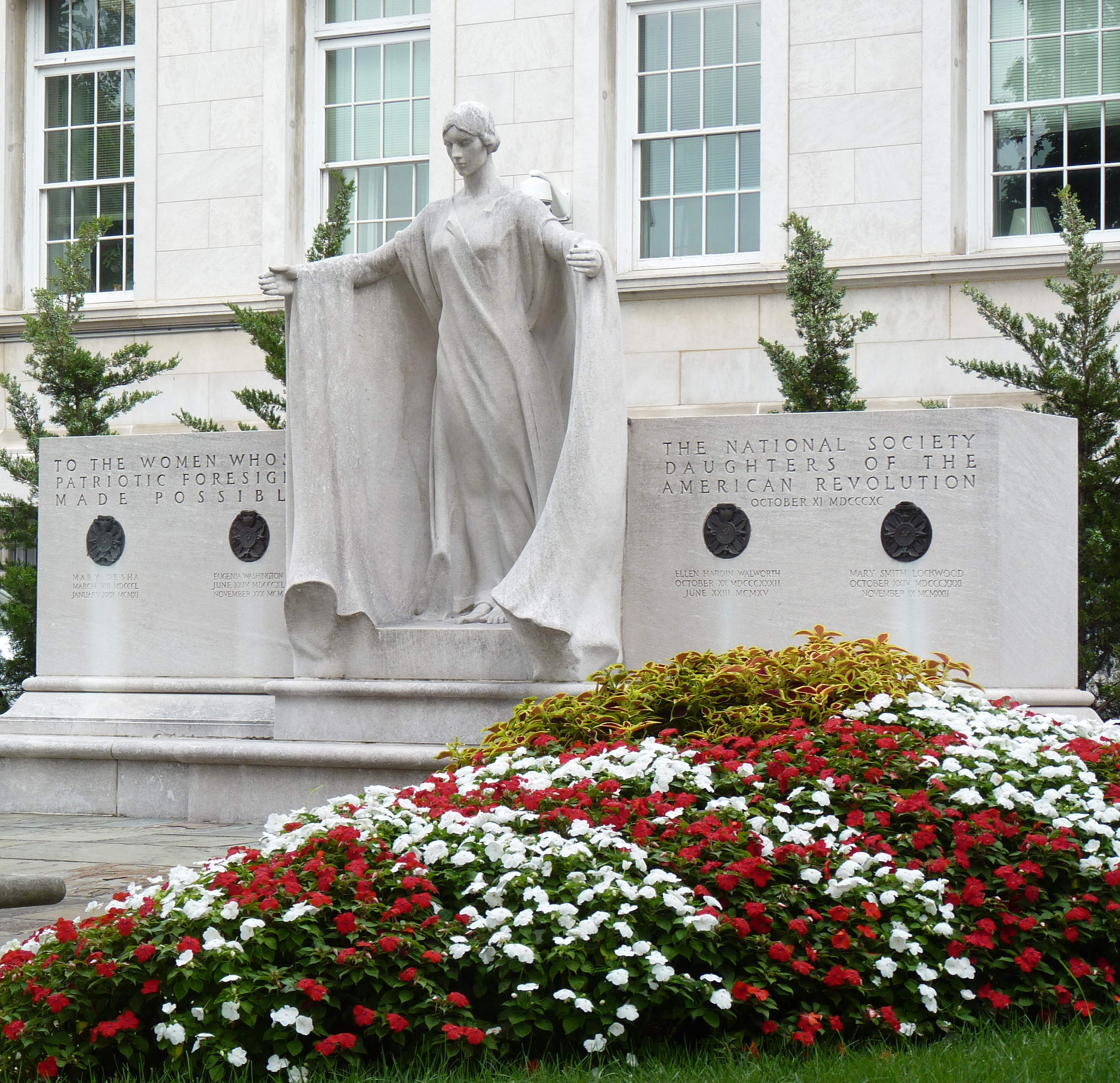 Noted artist and DAR member Gertrude Vanderbilt Whitney sculpted this beautiful monument from Tennessee marble.  The graceful, feminine form depicted here is typical of Whitney’s sculptures.  The human figure was her favorite medium through which to illustrate the expanse of human emotions and ideas.