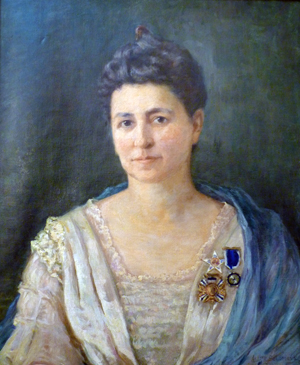 Mary Desha was born on March 8, 1850, in Lexington, Kentucky. She was well educated and for a short time studied at what is now the University of Kentucky. When her family was impoverished by the Civil War and the women were needed to provide an income, Miss Desha and her mother opened a private school in which they taught their friends’ children. Several years later, Miss Desha accepted a position with the Lexington public school system and remained there until she took a job as a clerk in Washington, DC, in December 1885.

After spending a few years in Washington, Miss Desha accepted a teaching position in Sitka, Alaska, in 1888. She found the living conditions endured by the Alaskan natives unacceptable and her written protest to the government in Washington resulted in a federal investigation. She returned to Lexington in 1889, but shortly thereafter accepted a post in Washington as a clerk in the pension office. She later worked as a copyist in the Office of Indian Affairs.

Miss Desha continued in the civil service until her death, and also spent her own time after working hours acting as an Assistant Director of the DAR Hospital Corps during the Spanish-American War in 1898. Mary Desha died on January 29, 1911. Her fellow Daughters honored her memory with the first memorial service ever held in Memorial Continental Hall.