http://www.burnhamtavern.com/
Washington County
One blcok off of Route 1 on Route 192
Machias, ME 04654

"In early June 1775 the men and women of the fledgling settlement of Machias found themselves on the horns of a very difficult dilemma. Hard on the heels of the news of Lexington & Concord had come an ultimatum. In order to obtain critical supplies the settlers must see their lumber shipped to Boston to build barracks for British troops. If they refused, they faced hunger and the wrath of Lieutenant Moore, commander of the armed British vessel Margaretta which sat in the harbor, its guns leveled at their homes. If they complied, they betrayed the American cause. The Tap Room of Job Burnham’s tavern, which stands at the center of Machias and overlooks the river anchorage, became the scene of hot and heavy debate as the settlers struggled to decide. Jeremiah O’Brien, Job’s brother-in-law, argued hard for aggressive action and urged the capture of the British commander and his ship. With the support of his five brothers and several veterans of the French & Indian Wars, Jeremiah ultimately prevailed and plans were made to take Lt. Moore while he sat in church the next day, June 12, 1775. Alas, things did not go exactly as planned. Lt. Moore chose a seat that afforded a view of the trail from Pleasant River, and he spotted men arriving with scythes and pitchforks. Correctly surmising that the crop about to be harvested was himself and his men, the Lieutenant bolted through a near-by window and, the element of surprise on his side, managed to make it back to his ship. As soon as her commander was aboard the Margaretta began to move down the river toward open water. Some forty patriots, armed largely with farm implements but with a few muskets among them, followed in two merchant vessels, the Falmouth Packet and the Unity. In the ensuing battle Lt. Moore was shot and the Margaretta captured. Burnham Tavern now became a hospital as both sides had suffered casualties. Lt. Moore soon succumbed to his wounds, and there is in Burnham Tavern today a chest that is said to be stained with his blood. Jeremiah O’Brien went on to serve the new country as a privateer (he was captured and imprisoned in England but escaped and returned to fight again) and the Tavern holds many mementos of the O’Brien family, some personal, others pertaining to the several ships which have been named for them. But artifacts related to the "Lexington of the Sea" (as some have called the capture of the Margaretta) make up only a small portion of the collection at the Burnham Tavern Museum. For those interested in architecture, the Tavern itself, built in 1770 and largely original, is well worth seeing. Site of the first naval battle of the Revolutionary War, June 12, 1775." (Wording from the Burnhamtavern.com homepage.) 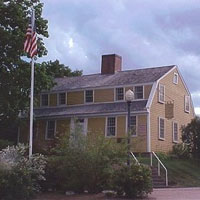 This museum is owned and operated by the Hannah Weston Chapter, NSDAR.

Information for the Visitors:

What you need to know if interested in visiting this destination: