In each issue, the bimonthly DAR magazine, American Spirit, highlights an object from the DAR Museum collection in its "National Treasures" feature. These objects always have a story to tell about American history.

John Fox, a soldier during the French and Indian War, made good use of his free time by carving maps and designs on powder horns for other soldiers. Known examples of his work date from 1759 to 1764. Fox likely served under Colonel Henry Bouquet, until Fox deserted the British Army in May 1764. Just before he fled, he created this intricately detailed horn that bears graphic depictions of the vulnerable and contested frontier lands, especially of Western Pennsylvania.

Fox’s map begins in Philadelphia and continues northwest farther into Pennsylvania, past “Laganeer” (Ligonier) to Fort Pitt, and on to Erie, Pa., and New York. It illustrates the circuitous geographic progression and movement throughout the hotly contested region during the French and Indian War. Fox included fortifications, rivers and buildings. His forts and other carvings, including the Widow Gray’s Horse, a Masonic compass, and the British coat of arms complete with the lion and the unicorn, would have been visually familiar to soldiers in the 1760s. —Carrie Blough 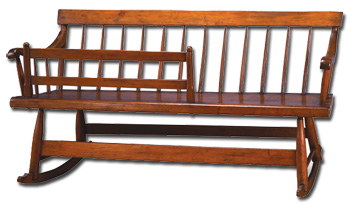 Perhaps the most unusual feature about this rocking bench, probably made in the Mid-Atlantic region around 1840, is the removable rail at the front of the seat. With the rail, the rocking bench... END_OF_DOCUMENT_TOKEN_TO_BE_REPLACED