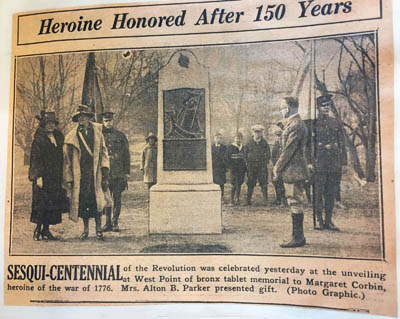 While there were folktales and local legends about a woman who heroically took over her husband’s cannon during the Revolutionary War, there were few efforts to try to verify her identity during the 150 years that followed the war. That is until historians and locals interested in the story sought out the Daughters of the American Revolution to solve the mystery. A research committee appointed by the DAR New York State Regent, led by DAR New York State Historian Amelia Parker and comprised of DAR member as well as non-member historians, set out with three goals: to confirm the historical identity of “Captain Molly”; locate her unmarked grave; and secure permission from the U.S. Military Academy for a burial site of honor for Margaret Corbin.

Residents of Highland Falls, N.Y. (located just south of West Point) passed down stories for more than 125 years about “Captain Molly” living in their town. A man who proudly claimed to have assisted in the burial of “Captain Molly” often showed those who were interested her gravesite and passed down that tradition to his son and grandson after him. The burial site was considered to be on land that was purchased by J.P. Morgan, Sr. in 1872 to build his Cragston Estate. Legend had it that on this land were two or three undisturbed graves, one of which was that of “Captain Molly.”

Arthur P. Abbott, from New York City, had been shown the supposed grave of “Captain Molly” in Highland Falls and began compiling information and enlisting other historian’s input on connecting the story of “Captain Molly” with that of Margaret Corbin. Others also began holding the belief that the two women were one and the same, and if so proven, believed she should have a more dignified burial site of honor. So they went to the New York State Daughters of the American Revolution to request they undertake the research.

With a research committee appointed and Amelia Parker at the lead, the committee set out to research the local folklore as well as primary source documents to attempt to connect the two identities. They researched the archives of the library of the U.S. Military Academy at West Point in which the Papers of War 1783-1790 include letters from William Price, Commissary of Military Stores, who copied the letters sent to Major General Henry Knox (Secretary of War) asking for supplies for the maintenance of “Captain Molly.” The research committee also referenced the Journal of Continental Congress, July 6, 1779, which recognized Margaret Corbin for her heroic efforts during the Battle of Fort Washington by granting her lifetime pay and support from the U.S. Government, connecting her to the letters showing “Captain Molly” was also entitled to support from the U.S. Government. 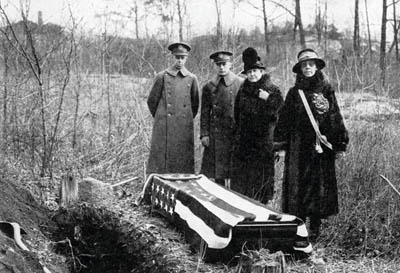 But the missing link to merge the two identities came from original papers of General Knox from a letter in 1782 that confirmed Margaret Corbin had been in the Corps of Invalids, placing her at West Point at the time when William Price was writing about taking care of “Captain Molly.” Because Margaret Corbin was disabled from her injuries sustained in the war and with no living family to take care of her, they calculated that she would have remained in the vicinity of her benefactors–the dispensers of the bounties of the United States Government at West Point.

After securing those permissions, the DAR opened the grave on March 16, 1926 with the research committee, officials from West Point and others present. Amelia Parker gives a first-hand account:

When the grave was uncovered, the bones lay in perfect position with the right arm at her side and the left hand on the breast. They were imbedded in the earth, as the coffin and garments in which she had originally been buried were rotted away. The skeleton was removed piece-meal and reverently placed in the silk-lined casket, until nearly the entire frame of the body had been so assembled.

The surgeon of the West Point Hospital gave the information that the skeleton was that of a female, and that the left shoulder bones bore evidence that they had been injured, verifying history that her shoulder and breast were badly bruised and battered. The surgeon dentist found most of the teeth on both upper and lower jaw on the left side missing, while on the right side they seemed to be worn, which might verify the tradition that Margaret Corbin smoked a clay pipe.

The remains were then taken to West Point and placed in a grave on the lawn between the Old Cadet Chapel and the Storm King Highway, where the grave was visible by passersby. 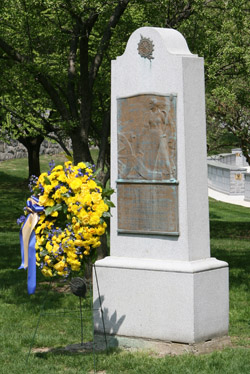 The New York DAR commissioned a granite memorial monument erected at her gravesite with a bronze tablet with the figurine in relief of a woman firing a cannon and an inscription about Margaret. They dedicated the monument on April 14, 1926 with full military honors for Margaret.

Following the ceremony, the DAR New York State Officers Club was formed in great part to help perpetuate the memory of Margaret Corbin. They have held a wreath laying ceremony at the monument every spring since the first ceremony to honor Margaret.

National newspaper coverage of events in 1926:

Carlisle Sure Body of "Captain Molly" Lies in Local Grave. The Republican-Journal. March 18, 1926.