Encompassing an entire city block, DAR Headquarters is one of the world’s largest buildings of its kind owned and maintained exclusively by women. We invite you to explore all there is to offer at our National Headquarters.

Virtually step inside the rooms of DAR Headquarters with this interactive 360 degree tour. Each virtual tour provides the opportunity for you to move around the room by dragging your mouse to the different areas you want to see. The 360 degree perspective allows you to see everything in the room from the beautiful chandeliers and architectural features to the antique furnishings and carpets, exploring the many highlights of the grand DAR buildings.

Memorial Continental Hall, the oldest building of the DAR complex, was designed in 1905 by prominent Washington architect Edward Pearce Casey, designer of the interior of the Library of Congress.

Upon its completion, Memorial Continental Hall was quickly recognized as one of Washington, D.C.’s most elegant buildings. The design for the building is in the classical revival style of the beaux-arts. Because of its classical detailing, the Hall fits in well with the Colonial Revival movement.

Memorial Continental Hall was designated as a Registered National Historic Landmark in 1935 for its role in world history, which includes hosting the famous Conference on the Limitation of Armaments in the wake of WWI (1921). Diplomats from all over the globe met to discuss limits on the proliferation of arms. Their work at Memorial Continental Hall remains a recognized milestone in global peace efforts towards disarmament.

This beautiful building continues to host a variety of events, including weddings, television and movie filmings and large corporate gatherings. For more information on holding events at DAR headquarters, visit Entertaining at DAR

Please view the rest of the "Memorial Continental Hall" video on YouTube.

Constitution Hall was built in 1929 and designed by John Russell Pope. The Hall is home to the exciting DAR Continental Congress, which takes place each Summer.

Since 1930, members of the DAR have come to Constitution Hall to conduct business and elect new officers during their annual convention. Over the years, Constitution Hall has hosted many popular performers and speakers.

In 1985, the Department of the Interior designated the building a National Historic Landmark due to its national recognition as a center for the performing arts.

With a seating capacity of 3,702, DAR Constitution Hall is the largest concert hall in Washington, D.C. It hosts a variety of events including concerts, speakers, films, graduations, corporate events, award ceremonies, television productions and gala dinners.

For more information on event planning or reserving space in this building, see Entertaining at DAR. 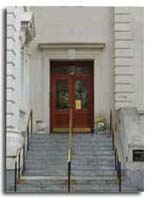 The Administration Building also contains the Americana Collection and the main Museum Gallery.

For information on event planning or reserving space in this building, see Entertaining at DAR.

Founded in 1890, the DAR museum collects, preserves and exhibits objects made and used by Americans prior to the industrial revolution. Decorative arts are the primary focus of the museum, which has been accredited by the American Alliance of Museums for over 4 decades. Changing exhibitions and educational programs for all ages provide a variety of opportunities for visitors to experience the DAR Museum. Guided tours of 31 period rooms are available daily.

One of the nation's premier centers for genealogy

The DAR Library, housed in Memorial Continental Hall, is an inviting place to visit as well as to conduct research. Those looking for more information about their ancestors may find it in the DAR Library, which has an extensive array of genealogical resources. Many of these items are not available elsewhere.

Please view the rest of "The DAR Library" video on YouTube. 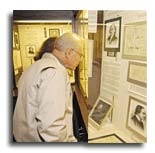 This intimate gallery contains early American manuscripts and printed materials, such as newspapers, rare books, prints, and items of historical significance to the DAR.

All buildings and galleries at DAR Headquarters are open to the public. Please call (202) 628-1776 with any questions. See Hours and Visitor Information for details on traveling to the building. We hope to see you soon!

Looking for a Scholarship?

DAR offers a wide range of scholarships for a variety of different disciplines.  Learn more...