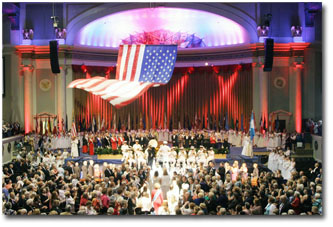 The Daughters of the American Revolution Continental Congress is a time-honored tradition that has been held in Washington, D.C. as the annual national meeting of the DAR membership since the organization’s founding in 1890. Not to be confused with the United States “Congress,” the DAR national meeting is named after the original Continental Congress which governed the American Colonies during the Revolutionary War.

National, State and Chapter DAR leaders as well as other members from across the world meet at the DAR National Headquarters for a week during the summer to report on the year’s work, honor outstanding award recipients, plan future initiatives and reconnect with friends. Those in attendance include over 3,000 delegates representing the membership of 185,000 Daughters from all 50 states, the District of Columbia, and many international chapters. Since its founding, the DAR has promoted historic preservation, education and patriotism and those objectives are reflected in all of the events of DAR Continental Congress.

In addition to member awards and student essay and scholarship awards, the DAR presents its top national awards at the convention including:

DAR Members can visit the Members’ only section of the website to learn more detailed information and make arrangements to attend the most anticipated DAR event of the year, DAR Continental Congress.