On Her Way: Madeline McElroy 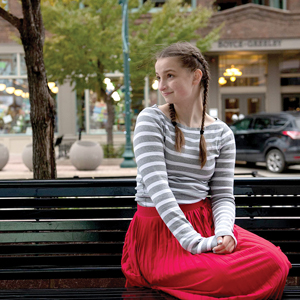 Madeline McElroy, diagnosed at age 7 with Type 1 diabetes, is enthusiastic about sharing what she knows about the disease—in the hopes of demystifying it and helping others cope.

“I was diagnosed at such a young age, so it’s always been a part of my life,” said the member of Mary Chilton DAR Chapter, Sioux Falls, S.D. “But I never want to use my diagnosis as an excuse. It may be part of my life, but it doesn’t run my life.”

When she was first diagnosed, Ms. McElroy and her family immediately got involved with the local chapter of JDRF (formerly called the Juvenile Diabetes Research Foundation). Though she missed that year’s JDRF One Walk fundraiser, she has proudly participated every year since.

Four years ago, she was selected to represent South Dakota as a Teen Ambassador at the JDRF Children’s Congress. In addition to doing media spots that aired in her home state, she traveled to Washington, D.C., to meet with fellow teens from around the world who also have Type 1 diabetes. Because of her interest in horseback riding, Ms. McElroy was paired with a teen from Israel with similar hobbies.

“It was interesting to hear how diabetes is treated in other parts of the world,” she said. “There are some innovative technologies and treatments in other countries that aren’t yet available in the United States.”

The three-day trip culminated in meetings with her members of Congress, with whom she shared her story and encouraged to support bills that provide funding for Type 1 diabetes research. She had met them previously at events back in South Dakota, but those brief encounters didn’t take the edge off the nervousness she felt talking to them again.

“I was shaking the first time I met them,” she said. “The entire time my feet would not stop wiggling.”

But her concerns were unfounded, thanks to a background in theater, her love of talking to people and a sudden wave of confidence. “After that first meeting, everyone who was there said, ‘Wow, you can speak well,’” she said. “I wanted to get my points across but also enjoy the experience.”

She returned to the nation’s capital in summer 2019 to serve as a Page at the DAR Continental Congress.

“What an empowering experience, being surrounded by all these amazing women,” she said, describing her week at DAR headquarters. “It was so much fun learning about the history of the organization and all the things we do in the world. It’s a spectacular organization.”

Ms. McElroy is now back in Sioux Falls, finishing her first semester at Augustana University. She enjoys telling new friends about how she’s part “cyborg.”

“I wear an insulin pump, which makes me feel like a cyborg,” she said. “I think it’s the coolest thing ever. It’s a great conversation starter.”

Ms. McElroy said she’s inspired to speak so openly about her diabetes because she knows the impact it could have.

“I’m always happy to meet someone else with Type 1 diabetes,” she said. “But I also know their experience might not be my experience. I try to think about them when I’m sharing my story. If I can help diabetes seem less scary, then maybe I can help them feel more empowered.”